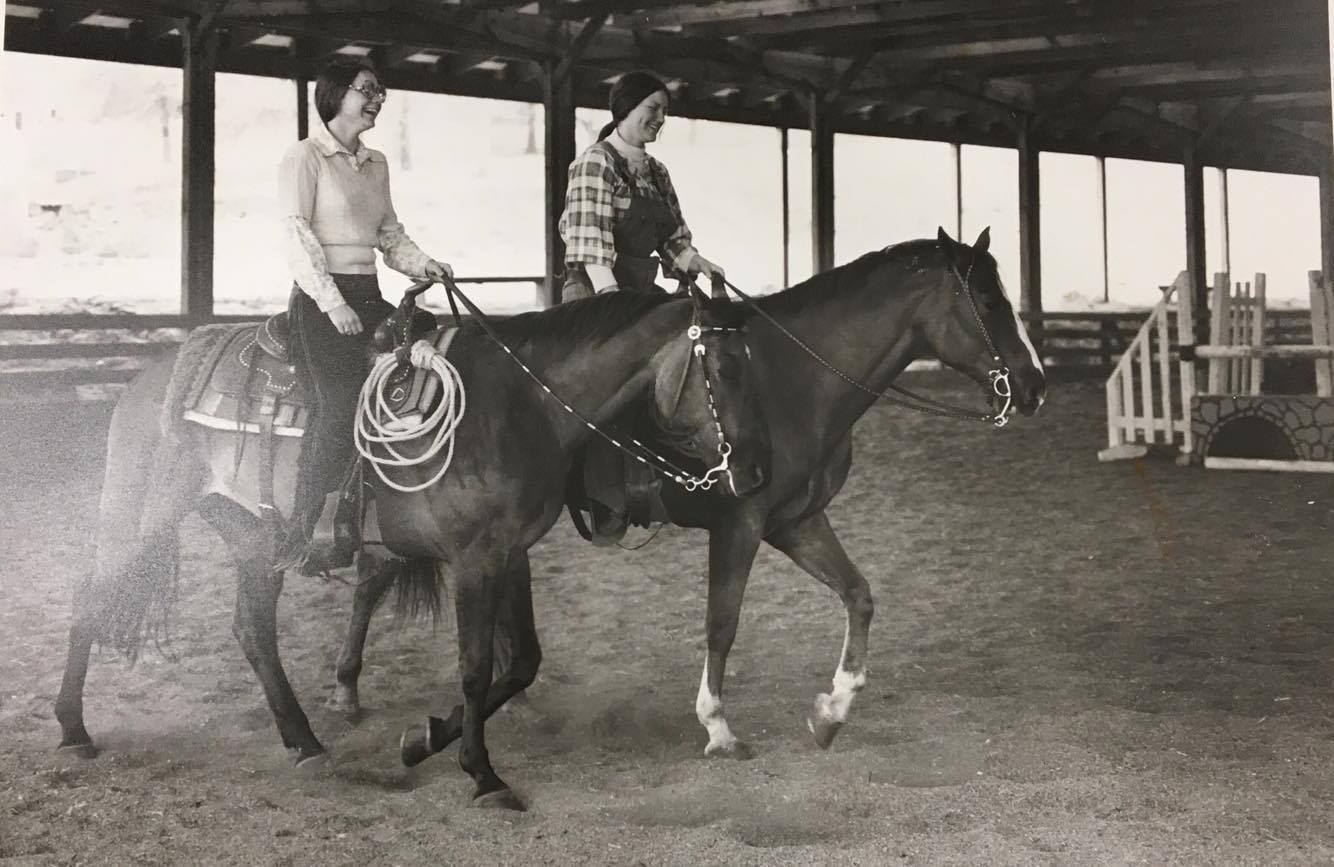 Two Lindenwood students riding horses in the 1970s in the facility that would become the Field House and Fitness Center.
Photo from the Mary E. Ambler Archives.

Two Lindenwood students riding horses in the 1970s in the facility that would become the Field House and Fitness Center.
Photo from the Mary E. Ambler Archives.

The history of the Field House and Fitness Center

Lindenwood was once home to a successful horse-riding club.

When Bertita Graebner first came to Lindenwood almost 57 years ago, there was a popular horse-riding program on campus.

Graebner, a native of Illinois now living in California, said Lindenwood was a very different place back when it was a women’s college of only a few hundred students.

“It was just Roemer Hall, a couple of other buildings and Cobbs Hall around the corner and that’s it,” Graebner said.

She said she wanted to get her degree in English and philosophy after high school. While she was at Lindenwood, she took a class with the equestrian team that counted as her physical education credit.

Riding horses was a whole new world for her, and as she continued learning the craft, she developed preferences for certain riding styles.

“I think the actual experience of getting up on a horse, no matter what saddle, gave you this sense of freedom,” Graebner said. “It’s like when you go for a really good walk.”

In Graebner’s day, Lindenwood had a “horsemanship” major through the Physical Education department.

George Champlin Sibley founded Lindenwood in 1827 as a women’s-only college, which it remained until the 1960s.  The equestrian program, founded in 1932, was one of the first athletic activities for Lindenwood students.

Originally, Lindenwood had a small horse barn behind Ayres Hall. In the late 1960s, the equestrian team moved to a larger facility, which, years later, became what it is now: the Field House and Fitness Center for student-athletes.

Even though Graebner never felt like she was an asset for the program because of her short stay, she came to admire the director, Fern Palm Bittner, and her efforts to create a quality program.

Bittner had originally come to Lindenwood in 1953 as a student to complete her bachelor’s degree in physical education; little did she know, she would end up being in charge of the program almost immediately.

She taught in the program for three years. When she graduated, she became the Director of Horsemanship for the next 24 years.

Bittner came from a well-known and prestigious saddle horse family in the riding community.

In the beginning, the Beta Chi Riding Club had only two members, but after Bittner took over, the program expanded to almost 45 members, as young students became more and more interested in the program.

In 1954, the college decided to embark on a major expansion of the horse-riding program.

The school offered a horsemanship emphasis within the Physical Education department, and any student could take the class. Students who were majoring in horsemanship needed to have a minor because Bittner thought they could direct their equestrian interests into broader channels, according to records.

Lindenwood had always been primarily “saddle seat” oriented, which is designed to show off the high action of certain horse breeds. Bittner was taught that way, and she was the school’s only riding instructor, but she wanted to teach more varied styles to her students.

Inspired by a student of hers who was from Mexico, Bittner decided to take a group of her students to San Miguel de Allende in Mexico every other year during winter break to practice horse-riding in another culture. This trip also offered students the chance to practice their Spanish and see new architecture.

Any student could take equestrian classes like physical education, but in order to become a member of the Beta Chi Riding Club, Lindenwood students had to take four tests. The first test consisted of bridling and saddling; the second test was based on riding, which included figure eights, straight-line lead changes, and riding without stirrups. The third test was oral and covered stable management and basic rules, and the fourth test, which was written, consisted of questions regarding horse anatomy. Once the students passed the tests, they were members of the club and could practice and ride a horse anytime.

During their junior and senior years, students were offered internships, during which many worked with horse trainers, veterinarians, or equitation instructors.

The riding program had more horses than stalls, and it was clear that there was a lack of space to practice. In 1968, the school made the decision to build a 40-stall stable on what was then the western edge of campus, along with a riding arena. The new stable was 21,000 square feet and pieced together by wooden posts and beams.

After construction, the Missouri Horse Show Association awarded the stables second place in the High Point stable contest, and Lindenwood received the Horse Show of the Year award.

In the 1970s, Lindenwood hired John Korenak to teach hunt-seat riding and jumping.  Korenak was a 25-year-old undergraduate student at Lindenwood College majoring in biology, according to the Ibis, the college newspaper at the time.  He was hired as a part-time instructor during his undergrad because of his extensive experience training and breeding thoroughbreds for racetrack and show rings.

But even though things were going well for Bittner’s successful program, it was not long before it would end. Lindenwood filed for bankruptcy, and in 1981, the program was canceled because it was too expensive for the school to maintain, according to school records. The college even sold the horses to generate revenue.

After that, the stables and the riding ring sat unattended for years. Different ideas for the space were considered, several construction permits were requested and denied, but eventually, after more than a decade of construction, renovations were completed in 1992, according to school archives.

To turn them into what they are now, the total cost for the renovation was $413,536. The renovations consisted of a concrete floor, an enclosed arena with heat and ventilation, and the addition of an asphalt parking lot.

After Bittner’s tenure at Lindenwood, she became Professor Emerita and received the American Royal Horseperson of the Year award in 2007 for her contributions to the horse show industry. In 2010, Bittner was inducted into the Lindenwood Athletics Hall of Fame before she passed away on Nov. 28, 2013.

The former stable is now known as the Field House and the riding arena became the Fitness Center. Today, the buildings are frequented by athletes and trainers, booked with early morning weights practices.