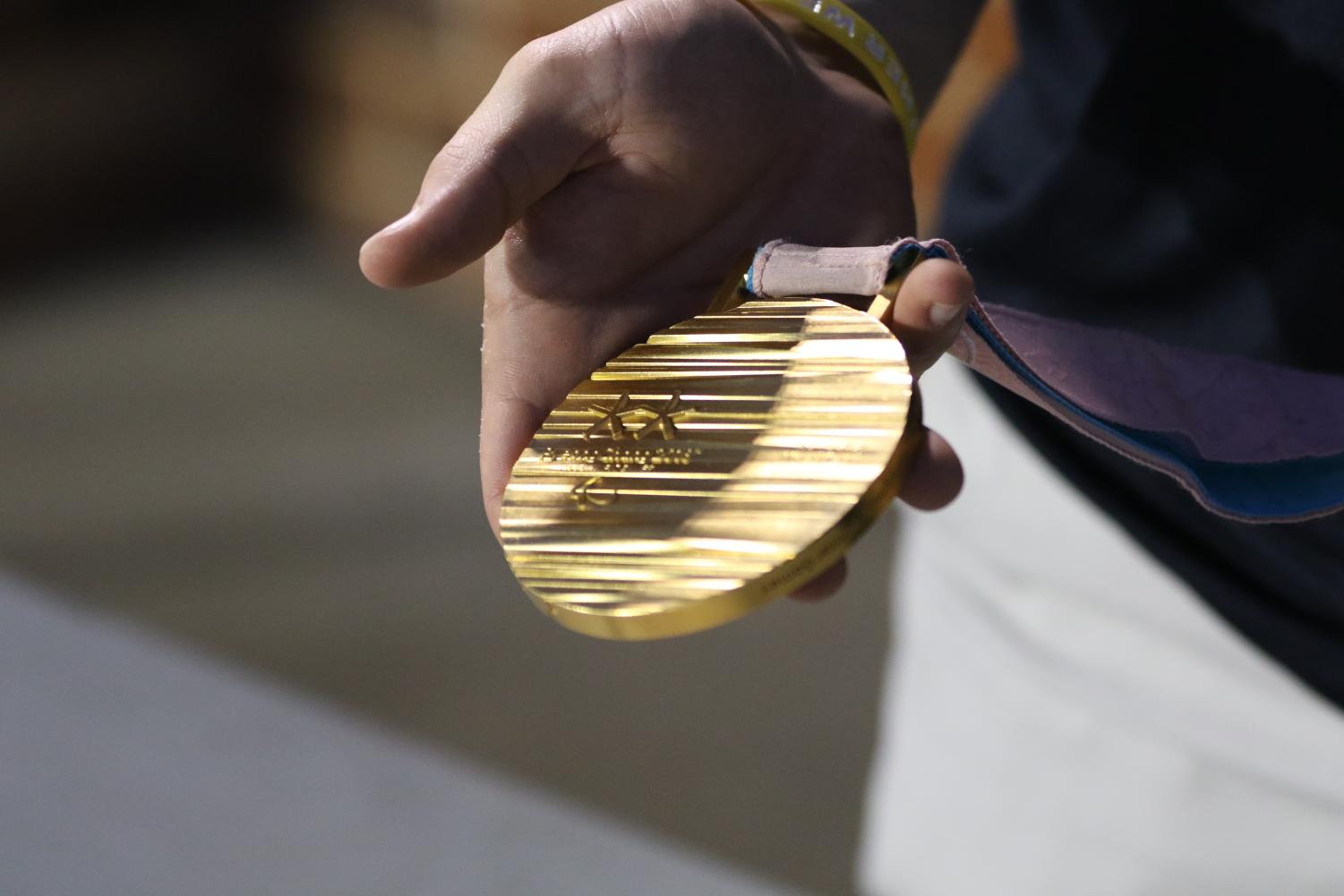 During a signing of his book, Josh Pauls shows his sled hockey gold medal from the 2018 Paralympics in PyeongChang, South Korea. (Photo by Kayla Drake)

During a signing of his book, Josh Pauls shows his sled hockey gold medal from the 2018 Paralympics in PyeongChang, South Korea.

The story of a Paralympic gold medal-winning sled hockey player

Josh Pauls was only 10 months old when his parents decided to have his legs amputated at the knee because he was born without shin bones.

For his entire life, things that were basics of everyday life for most people were more complicated for Pauls, who wears prosthetic legs.

“I just had to plan a little bit more than others,” Pauls said. “Especially in college with the parking, and the hills. Now, it’s less challenging because I’m walking everywhere.”

While, as Pauls mentioned, his amputation is a part of his identity, so is the sport of sled hockey. He got into the sport in large part due to his parents, who were both big fans. Pauls watched his first game of sled hockey at eight years old, and started playing it at 10 when he joined a team, the New Jersey-Woodbridge Warriors, about 30 minutes away from him.

In sled hockey, disabled athletes compete in specially made sleds with two blades on the bottom and use two hockey sticks to propel themselves.

“I don’t know if it’s the freedom it gives me, but it’s the sport for me,” Pauls said.

Five years later, he started playing for the New York Rangers sled hockey team, which was his first adult team. Pauls suited up for the Rangers from age 15 to the time he started school at Lindenwood University.

A teammate of his on the United States National Sled Hockey Team – who Pauls started playing for in 2008 – told him about how Lindenwood was starting up a sled hockey team. When Pauls came to St. Charles on his tour, he loved both the atmosphere and people, and by the end of his visit, he already knew he was interested in coming to the school.

And so he did. Pauls started at Lindenwood in 2011 and also began playing for the DASA (Disabled Athletes Sports Association) St. Louis Blues. With the Blues, Pauls found teammates who allowed him to settle in and become more comfortable in his new home.

“Those guys helped me grow up, as I’m away from home for the first time,” Pauls said. “A big thing in me staying here is because of these guys.”

Pauls has enjoyed a career of winning several competitions, including national championships with the Blues in 2012 and ’13. Where his biggest glory came from, though, was with the U.S National Team. Pauls has won gold medals in each of the three Paralympics he’s been a part of – PyeongChang, Sochi, and Vancouver – and has won three golds in his World Championship career.

Before turning 18, Pauls had already won a gold medal in the sport of sled hockey, something he said he is proud of achieving.

“To be 17 years old and wearing the gold medal,” Pauls said. “It was one of the best things I’ve ever gotten to do.”

In his career, Pauls started off as a forward and moved to defenseman, and has played in around 155 games for Team USA. Offensively, he’s scored 45 goals and tallied 75 assists in these games. To go along with his six golds between the Paralympics and World Championship, he’s also won two silvers (2013, ‘17) in the latter.

Putting the United States uniform on over his career has been both a challenge and also a special achievement for the now 27-year-old.

“It’s not only a sense of pride to know you’re a top-17 player in a country, but it’s also a lot of pressure,” Pauls said. “But, it’s a lot of fun to travel the world representing the United States.”

Not only is he one of the nation’s top sled hockey players, but Pauls was also named Team USA’s captain at the age of 24, the youngest in its history. Even at such a young age, Pauls said the leadership role seemed natural to him.

“Part of it [captaining a team] is making sure I don’t do anything totally different,” Pauls said. “Being true to myself is something I’ve had to work on, but has made me a successful captain.”

Chris McCoy, a sophomore at Lindenwood, is a teammate of Pauls’ on both Team USA and the DASA Blues. McCoy described the veteran as a clear communicator.

“He is very well-spoken; if you make a mistake, he will make sure to explain what you did wrong and how to fix it,” McCoy said. “He is also very calm and collected under pressure.”

Pauls said his teammates, like McCoy, and sled hockey itself, mean much more to him than just the experience of playing the sport.

“For me, it’s given me an identity,” Pauls said. “Being surrounded by people with similar challenges made me calmer and more comfortable in my own skin.”

After graduating from Lindenwood in 2016, Pauls has also added motivational speaking to his resume. He speaks at venues such as schools, businesses, and corporate events, as well as an event scheduled on campus in March, which was canceled because of the coronavirus.

“As a motivational speaker, I’m trying to help people become the greatest version of themselves,” Pauls said. “Attempting to help people grow as others have helped me. I don’t feel like I’ve overcome more than other people, but others do.”

In July of 2019, Pauls also had his first book published, “Lessons Learned: My Journey to the Podium.” The book puts into detail the adversity he has gone through in his life before reaching the golden glory achieved in his career.

McCoy, who has played with Pauls for the past six years, said he’s found motivation from his teammate.

“He has helped me realize my potential in the sport, then helped me reach that potential,” McCoy said. “He’s a major reason behind me making the U.S. developmental team.”

Pauls said he hopes people can gain motivation from his story, but from his personal experience of living with prosthetic legs, he knows that the responsibility falls upon the individual to use his speeches to fuel their aspirations.

“I’m giving them the tools, but they have to build the house.”